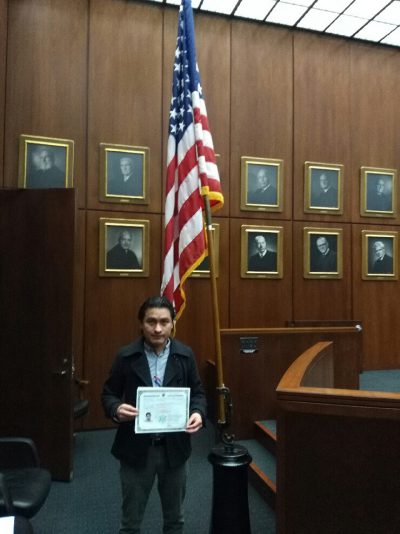 There was a song that I vaguely remember from my childhood and School House Rock Days.  It is titled, The Great American Melting Pot.

This song, though missing a colorful representation of African Americans and Native Americans, was the premise of which American culture was shaped and formed in some sense. There were no immigration papers, and it was an open policy for all who could merely arrive here by boat. I used to unnerve my brother when I would awake every morning and sing the National Anthem (let’s leave out the historical context of the reason this song was written; I desire to stay in my euphoric state for this blog). On Friday, a colleague shared that he had officially become an American citizen. Considering the demographic I serve, as a technologist and corporate motivator, I asked his permission to share his photo and his story. So…enjoy my colleague Armando in our Q & A.

ME: Armando, on March 29, you became an American Citizen, this is a fantastic journey. How long have you been in the US? Where are you from originally?

A: I have been in the US for almost 25 years. I’m originally from Mexico City.

ME: When and why did you come to America?

A: I came in September 1993 as a child. My father died in 1990, and my mother did not have any formal education. During this time the government started privatizing many factories because of NAFTA’s new regulations. My mother lost her job in the same year, and she had no other option but to immigrate to the US.

ME: What opportunities do you have in the US that were not available in Mexico?

A: One of the opportunities I did not have in Mexico was an education. After losing her job, my mother was not able to keep paying for both my brother’s and my education.

ME: Not looking for a right or wrong viewpoint, but what do you see as major cultural differences in the US vs. your home of origin?

A: I want to say a major change was the language. For me, it took me a few years to start communicating and adapting to American culture. Other than language, I noticed that in the United States, Americans spend more time in their profession, so much so that in some cases, work is first and second is family. Children are often raised more independently and are encouraged to be independent of their family.

ME: Do you think you will take your skills to your country origin in the future?

ME: Some people frown on immigrants who are not “legalized” citizens. With Congress being inactive or slow on DACA, what do you recommend for DACA recipients who are here of many ethnicities, countries, and striving for US citizenship?

I wanted to go to college and pursue a higher education. I decided to attend my community college, and while attending college, I worked in a restaurant to be able to pay for my education and help my family. After four years I earned two Associate’s Degrees: one in Computer Science and the second in Arts. It was not an easy accomplishment. In 2010 I was able to fix my immigration status and started working in my field.

ME: You are graduating from college with your degree in Information Technology and have become a US Citizen in the same year, what does this mean for you and your family?

A: After fixing my immigration status I was able to go back to finish my BA. During this long journey with many sacrifices, I never lost faith in my dreams. With the support of my wife and my community, in fall of 2018, I will be finishing my BA in Computer Network Security.

This year also gave me the chance to accomplish another dream–becoming a US Citizen finally. This means so much to me. Now I want to keep helping my community and many other dreamers.

I want to thank Armando for allowing me to share his truly inspirational story. It is one of many and we hope and pray, there are more to come.

Armando is a technologist for a major educational institution in Chicago, IL.