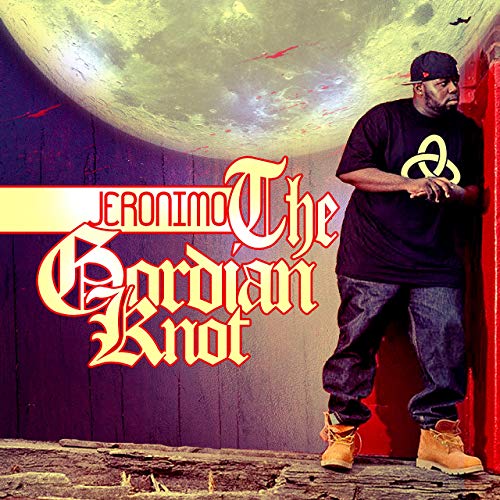 If you have not heard Jeronimo’s “The Gordian Knot” released in 2017 you are missing a perfect blend of Hip Hop, Spoken Word, Jazz & Blues. In an age where some rap music can’t be understood, interpreted or viable, The Gordian Knot tackles some of the most prevalent issues in the Black community and national news while maintaining an entertainment and personal vibe.

Jeronimo is one of the hardest working Spoken Word artist in Chicago, possibly the Midwest. Two published albums under his belt, awards, accolades, and standing ovations always follow his stage presence. He is a metaphorical genius. He bends words like a contortionist. His freestyle prowess in rap and spoken word is second to none. That doesn’t take away from any of the greats, known and unknown, currently in Chicago. He’s simply his own man with his own style.

One of my favorite tracks on the album is his trifecta with Muva “The Creator” and the internationally known “K-Love“, is Leadership. Too many quotable bars in this piece of art but Muva’s, “And it’s us they breed to fill these prisons for profits, straight from the projects…“, K-Love’s,”You still got faith in that non-violence, when you can get sprayed while you pray somewhere in South Carolina…“, and Jeronimo’s “If we are not equal then I am to lead you…” are a glimpse of what you can expect in a sheer mastery of intellect, history, culture, race, relevance, and verbal cuneiform.

He has risen from Chicago’s concrete jungle’s to build bridges in the community as Founder and CEO of Solace Souls Coalition. Every 3rd Sunday he hosts a Spoken Word Open Mic from 7pm to 10pm January through September. From October to December his team shuts down the open mic and uses their resources to ensure the homeless are prepared for winter by creating fundraising, clothing drives, and food provisioning. If anyone is deserving of a national spotlight, it’s my hope that this young mans talent, drive, passion, and humility will present him to the world in grand fashion.

The album is listed as “Explicit” probably due to the use of the *N* word. I would say don’t let that detour you from downloading, streaming, or listening to this album. I rate this album in Source fashion with 5 Mics. You will get a history lesson, a story of African-American plight, a rhythmic sensation of soul with Amber Whitted and Black Heaven, a relationship spell on Beast with a guest appearance by Darlin’ Mikki, and you will surely get to see one of Chicago’s gems of Spoken Word and Hip Hop.

Congrats on your project Jeronimo and continued success brother. The END is in your corner all day!

BELOW: For those who want a visual taste of of how he leaves emcees w/o a trace, watch close, you’ll miss his bars after he already spit in your face.

If you’d like your project reviewed, please email endurerradio@gmail.com